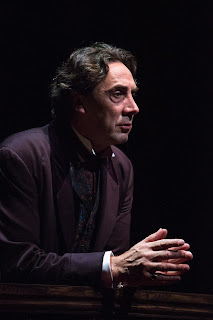 Who would have thought that a spelling mistake could lead to the ignominious and very public downfall of one of the greatest playwrights in British literary history? On February 18th, 1895, the Marquess of Queensberry left a card at the reception of the Albemarle Club for the attention of playwright Oscar Wilde. It simply read: "For Oscar Wilde, posing Somdomite". This card subsequently became Exhibit A in a libel case Wilde brought against Queensberry, but the truth was the Marquess knew exactly what he was doing in goading Wilde, who fell for his "booby trap".

The trial exposed more about Wilde's private life, proclivities and passions than he could ever have bargained for, and ultimately led to a counter-trial where the Crown prosecuted Wilde for gross indecency. The jury in this trial could not reach a verdict, but the retrial jury certainly did, and Wilde was sentenced to two years hard labour in prison. The sentence took its toll on Wilde both spiritually and physically, and three-and-a-half year later, he was dead, aged 46.

The Trials of Oscar Wilde gathers these three cases together into one riveting two-hour play, based upon the actual shorthand notes taken during the proceedings. Written by Merlin Holland (Wilde's grandson) and John O'Connor, the play re-enacts some of the juiciest exchanges in each trial, and it's fascinating to know that the words used are those actually spoken by Wilde in the courtrooms. Before the shorthand notes were unearthed in 2000, a playwright could only guess what was said, whereas now we can enjoy the tragic truth of what actually happened.

During Wilde vs Queensberry it is plain that the playwright was confident, perhaps even smug, about the trial's outcome. But after a certain amount of verbal jousting between Oscar and defence counsel Edward Carson, it becomes clear that the man of letters has underestimated the tenacity and detail of Queensberry's representative. After some time trying to tie Carson in knots, Wilde makes one statement which proves a fatal error. When asked if he had ever kissed a certain servant boy, Wilde replied: "Oh dear no, he was a peculiarly plain boy. Unfortunately ugly. I pitied him for it." That was all Carson needed to begin pulling at the frayed edge of Wilde's pompous defence, as Wilde inferred that if the servant boy hadn't been "peculiarly plain", he might have kissed him.

Steven Elliott has the unenviable task of embodying one of the greatest and most celebrated wits of modern times, and does a great job of getting across Wilde's hubris. He may not have the magnetic presence the man himself undoubtedly boasted, but Elliott gives Wilde great dignity and poise. During Act 2's Regina vs Wilde, there is a moment when the writer is asked to define "the love that dare not speak its name". Wilde's words were beautiful and poetic, and identified the misinterpretation of homosexuality that made him a criminal in his age: "It is in this century misunderstood... It is beautiful, it is fine, it is the noblest form of affection. There is nothing unnatural about it... The world does not understand. The world mocks at it and sometimes puts one in the pillory for it." Elliott's eyes well with sorrow during his delivery of this speech, bringing home the tragedy of Wilde's predicament all the harder. It makes you want to reach back in time and rescue him.

Keiron Self gives solid support as Wilde's lawyer, while Robert Bowman has the job of depicting three men who are essentially the "bad guys" in Wilde's trials - Queensberry, Carson, and latterly the Crown's prosecuting lawyer Charles Gill. Bowman manages to make each man as intelligent as he is hateful without resorting to boo-hiss villainy.

Stealing the show, however, is Francois Pandolfo as an array of characters, all of whom are cleverly distinct from one another. One moment he is a haughty judge, the next a slimy blackmailer; one moment an effeminate former partner of Wilde's, the next a busybody hotel chambermaid. Pandolfo's range is stunning, and when he becomes the confident Italian Migge - "professor of the massage" - the audience is in the palm of his hand.

Holland and O'Connor have woven a mesmerising play out of their source materials, depicting the downfall of a great man both truthfully and entertainingly. The random peppering of passages from The Importance of Being Earnest seems unnecessary, and sometimes Peter Knight's score comes in and out a little abruptly, but overall the jewel at the heart of the production is history itself. It's like standing in the courtroom witnessing the trials first-hand, and is as close to time travel as we're ever likely to get.

Whether Wilde was the victim of his own hubris and pride, or whether Queensberry was the architect of his calamitous fall from grace, is up for interpretation, but what this play proves is that Oscar Wilde certainly had a strong hand to play in what became of him. If only he'd ignored that spelling mistake...

Email ThisBlogThis!Share to TwitterShare to FacebookShare to Pinterest
Labels: Pontio, The Trials of Oscar Wilde