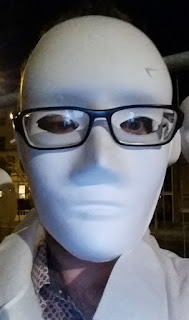 Anybody out for a few beers in Llandudno on Friday night might be mistaken for thinking their drinks had been spiked when they saw a group of people dressed in white smocks and wearing blank, white face masks gathering outside a disused garage in the heart of the town.

It made for a surreal experience, but this was not a bizarre religious sect or a re-enactment of the unsettling Solutions section of The League of Gentlemen's Christmas special (if you've never seen it, where have you been?!). It was the meeting place for Joel Cockrill's installation Ffloc, an immersive experience which converts an old mechanic's garage on Mostyn Broadway into a walk-through world of loud music, projections and bilingual voiceovers.

The audience is asked to wear the white garb before they go in, which has the unsettling effect of homogenising everybody, removing their identities by blanking their faces and deleting our fashion choices. All that can be seen are little confused eyes peeping through, with some of the ocularly challenged wearing their specs on top of the masks. All very strange, but great for photo opportunities! The experience itself is a little disorientating, a little confusing, not altogether clear in its aim or premise, but maybe that's the point. On Friday night we got the music performed by a live band, but didn't get the smoke effects promised in the brochure (perhaps not surprising for a building of its size and lack of ventilation). I didn't feel connected with the performance so much as impressed by the set-up - being surrounded by tens of blank, staring faces while your ears are bombarded with trip-hop sounds, rap-poetry and Welsh language reminiscences was memorable enough.

Ffloc translates as the English floc, "a loosely clumped mass of fine particles". Knowing the definition alone helps to understand the point of the installation much more, I think.

On display all weekend is Eli Acheson-Elmassry's Sobbing House installation, a life-size reproduction of her own home on Anglesey rendered in rubber latex and suspended from scaffolding in the car park of the derelict Tudno Castle Hotel. I saw it lit at night with added effect, and it's great that you can walk in and around the installation, seeing how she did it and boggling at the sheer scale of what Eli's achieved. To all intents and purposes she's recreated the facade of her house in a brand new location. Home is wherever we want it to be, and often it's in our hearts, and not so much a physical place. It's worth seeing this after dusk for the photo opportunities alone.

There was a cartload more of surreal at the town's Oriel Mostyn gallery with Shani Rhys James's Automaton, a headless mannequin dressed in a Victorian governess's jet black gown which taps out a rhythmic pattern with its clawed, metallic finger onto a steel table. Interacting with and around this set-piece were two dancers, one dressed in a white hoop skirt and corset, like a damaged ballerina from the imagination of Tim Burton, the other dressed in an ankle-length black dress, feathers, top hat and gimp mask. I've no idea what they represented to the artistes, but to me they were just plain spooky. Was one the oppressor, the other the oppressed? Who knows, but for a whole hour this Victorian tragedy played out within the corridors and staircases of Oriel Mostyn, at first the centre of attention, and later drifting in and out of people's interest, as if they were permanent phantoms of the gallery.

One of the centrepieces of Llawn03 is the Haus of Helfa at 26 Augusta Street, which sees a reclaimed empty building transformed into a showcase for various different Welsh artists. Each artist has their own room or space, and you can walk freely around the house, up and down its four storeys, wandering in and out of them all. There are flickering television sets, picture frame-topped tables, an Edwardian style repository, a naked woman floating in a fish bowl, a room full of starkly lit white envelopes, even a room that you enter through two billowing ceiling-high sheets. Alan Whitfield's Eyes Down installation recreates a tacky bingo hall, complete with formica tables, bingo cards and dabbers. Every now and then Alan will don his glittery blue jacket to play a game, and the audience can play along. I was lucky enough to win a line (a Llandudno fridge magnet, something "I've always wanted"!), and there were prizes for winning a house too. Exhilarating stuff!

The entire Haus is a fantastic experience for the senses, and it's such a wonderful idea to transform this unused empty property into a hive of artistry and imagination. It's just such a shame it only lasts for one weekend - I think it would be a phenomenal permanent installation, with various artists given rooms on a periodic basis. It's close to the train station, so accessible to visitors, and would give Llandudno another cultural touchstone quite unlike anything else in North Wales.

The launch night ended with a cabaret show at the Haus of Helfa by drag queen Divina De Campo. Llandudno isn't known for its gay scene, so to see a drag queen in its midst is a refreshing sight in itself. Divina entertained the audience like a real pro, belting out hits from Liza Minnelli and Tina Turner, and even The Pirates of Penzance. There's more to this girl than long legs and fright wigs though - Divina's operatic voice is stunning, and she can do the splits in stacked high-heel boots. Drag queens are renowned for their sometimes intimidating stage presence, but Divina got it just right. If an audience member wasn't comfortable with interaction, she'd move on, and not with a barbed retort either. Divina is a force of nature and a revelation for anybody who's not seen a drag show before.

And there was so much more going on too. At 10 Vaughan Street there's an installation of papier mache recycled bottles designed by children at Ysgol Tudno; at 23 Augusta Street there's a jelly-themed installation by Owain McGilvary and Yan White; and Young People's Poet Laureate for Wales Martin Daws debuted a brand new bilingual work relating to Llawn03's theme of Revisit/ Reveal.

And this was just Day 1. It's going to be a packed weekend, full of drag queen bus tours, outdoor movie theatres and dance performances in caves. A riot of diversity, colour and FUN!

Link to Llawn03 website and full line-up.
Posted by My Old School Books at 11:07 am