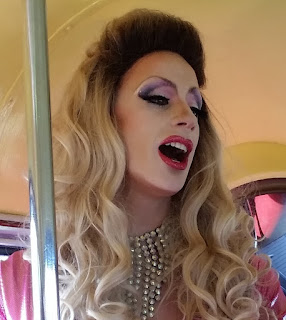 Definition of 'different': a tour of Llandudno's lost theatres aboard a red double-decker bus festooned with pink balloons, accompanied by a drag queen singing operatic arias and a mute who likes to act out through the medium of mime.

That's Divina and Dymphna's Day-Glo Bus Tour in a rather cracked nutshell. And it was fabulous! The bus was originally to have been an open-topped affair, so it was a shame it wasn't in the end as Divina De Campo's stacked high-heel boots made her so tall that she couldn't stand up straight with a roof on top! But it made the tour a much more intimate affair. As we were driven around Llandudno's "treacherous one-way system" to visit the former locations or currently derelict theatres of the resort, Divina educated us in her own amusing style about the buildings' history, their origins, heydays and downfalls, while Dymphna D'Arcy careered up and down the aisle acting out Divina's commentary.

Dymphna is a force of nature, resembling Dot Cotton's long lost gypsy sister, and tumbled and leapt upon passengers as the bus trundled around the town. When Divina started to talk about the plot of an opera in which somebody stabs their lover, it was me who got the pretend knife in the shoulders - and Dymphna has a heck of a swing on her! But if I wake up tomorrow with intense bruising, it'll have been worth it!

But as mentioned in my review of Day 1 of Llawn03, there's more to Divina than curly wigs and plunging necklines. That girl has one hell of a voice on her, and accompanied the tour by singing various operatic arias at each stop. The passengers were given postcards of old photos of the theatres at their height - the Odeon, the Arcadia, the Grand and the Palladium - and we learnt that while the former two have long been demolished, there's still life in the Palladium (well, if you can call a Wetherspoon's life!) and there are ambitious plans for the dilapidated Grand (the old Broadway Boulevard nightclub). Who knew a bus ride with a drag queen could be so educational and cultured?

The sunshine drenched Llandudno in soaring temperatures on Day 2, which made the various promenade pieces even more enjoyable. One of the highlights was Babs and Stella's Intergalactic Spectacular, a comedy dance theatre performance by Kitsch 'n' Sync Collective and Alex Marshall-Parsons. Babs and Stella are conjoined cosmic space cadets from the planet Kitsch who find themselves terrorised by the evil Dr D Dreadful (or Deidre) and his terrifying Robopup and Cyberpussy. It's a madcap performance with its roots firmly set in 1950s B-movies and the colourful fun of Gerry Anderson (who can resist the theme tune to Captain Scarlet?).

What's most impressive about this performance isn't the well-crafted, amusing choreography, nor Alex's array of hilarious facial expressions. It's not the beautiful costumes or the wacky wigs and sunglasses. Above all else, it's the fact these three performers mime to a soundtrack for 15 minutes - everything from the music to the sound effects and even the dialogue is on a backing track, and the performers mime seamlessly to every word and turn. I've seen these dancers perform before in other guises (at Wales Dance Platform 2015) and can safely say there's more talent in this collective than you'll probably see in a whole season of The X Factor.


Further down the promenade two lady time travellers from Victorian times inexplicably found themselves on the roof of Venue Cymru, so naturally there was nothing for it but for them to abseil down the side of the theatre and make their way to the seashore. Kate Lawrence's Hints to Lady Travellers made for a unique spectacle as the duo roped up and "danced" their way down the glass frontage of the building, then crossed the busy road hand in hand, to finally pull off their hobnail boots and dip their feet in the chilly sea at the water's edge.

The journey was impressive, accompanied by a music track blaring from speakers, and must have confused many a passing motorist who could only see a crowd of people staring intently up at the sky with smiles on their faces.

Another promenade spectacle was Acrojou's The Wheelhouse, a nautical narrative street show which unfolds in and around a circular set which rolls along the prom, the audience in pursuit. It's quite unlike anything you may have seen before, and is presented beautifully by performers Barney White and Jeni Barnard. The design of both the rolling set and the costumes is reminiscent of the world of Mad Max or Waterworld, and it's enormous fun to see the story play out (a mime to music and sound) and to follow the progress of the Wheelhouse.

It's a tale of love on the high seas, but there's danger ahead for the lovelorn duo, and it's true to say the performers are in real danger themselves as they toss and career and leap their way in and around the steel-framed wooden wheel. They are obviously well trained and rehearsed, and know exactly what they're doing, but the high profile presence of two St John Ambulance medics made it clear that this 6ft structure was a dangerous prop. And while the medics' presence was appreciated, the fact they stood right in front of the audience in high-vis jackets, preventing anybody from getting too close, kind of spoiled the atmosphere Acrojou were trying to conjure. If the performance really was that dangerous, a lane should have been roped off along the prom which would keep the onlookers at a safe distance but allow everybody to see clearly. As it was, the medics got the best view of the show and somewhat spoiled it for everybody else craning to see past their bright yellow jackets.

There was much more going on during Day 2 of Llawn03 as well... Lisa Spaull's family dance project A World of Our Own at North Western Gardens saw children and their parents performing choreography inspired by a forest landscape and the creatures that shelter there; Llandudno Swing Band gave a rousing concert as the sun handed over to dusk on the promenade bandstand; and in the evening movie fans could watch the 1977 sci-fi classic Close Encounters of the Third Kind outdoors, like an old-fashioned drive-in, at the Great Orme dry ski slope. So many unique moments and images from a weekend of fun, all in the name of art.

Link to Llawn03 website and full line-up.
Posted by My Old School Books at 11:26 am