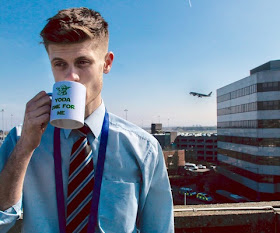 Dan is an ordinary kind of guy. He works as an airport baggage inspector. He cares as best he can for his mum, who suffers with Multiple Sclerosis. He loves doughnuts and hates mushrooms. He's a twentysomething everyman who we can all relate to. He's likeable and honest.

But Dan is also a "yes man", a pleaser, one of those people who's just too polite to say no or ask questions. He's typically English in that he'd rather smile and turn a blind eye than face confrontation. Which isn't the most ideal personality trait for an airport baggage inspector.

This performance is semi-immersive in that solo performer Ryan Gilmartin (as Dan) sits among the audience in what is supposed to be his staff room during a break. Dan has sandwiches to eat, and shares around bags of doughnuts (the chocolate custard doughnuts wisely remained unopened, but the jam ones went down very well in the performance I attended!). He talks to the audience as his confidantes, like fellow staff members on a lunch break, and over the course of 40 minutes or so he shares his thoughts on everything from the heroism in Star Wars to the depressing nature of current affairs.

We learn sporadically that he works with a man he calls Good Cop, as well as another chap labelled Pretty Pissed Off Cop, who you automatically feel uneasy about as soon as Dan mentions him. As Gilmartin weaves his meandering story the audience gradually begins to form an idea that all is not well with Good Cop and Pretty Pissed Off Cop's intentions, and as the piece nears its end, things don't seem all too well with Dan's intentions either. Without giving away the twist - it's actually less of a twist and more of a very slow squeeze - the audience realises that it has been listening to somebody whose flexible world-view has been tainted by the darker doctrine of his colleagues.

The B Word has much to say about radicalisation and indoctrination, and asks questions about what is right and wrong in this volatile environment of terrorism we live in today. Dan voices the theological debates he's been having inside his head when he questions left- and right-wing perspectives. He talks of the vulnerability of young men, of his own age, who are just trying to find a purpose in life. Some young men might take a gap year and travel to Machu Picchu, or teach English in Thailand, to try and find meaning. Other men might travel to Syria to find purpose. And we all know what can happen there.

Gilmartin suggests that the media is the greatest advert for terrorism. Does coverage of terrorist attacks glamourise them? Does it make it attractive to those young men seeking a meaning in life, who might be looking for a chance to make a mark or be noticed? Dan imposes a strict media ban on himself in order to filter out the bad news, which he says makes him feel better and happier (couldn't we all do with a dose of that?).

Gilmartin's story is buried beneath a veneer of "everydayness" in an effort to portray Dan as a regular kind of guy. At one point he takes a call from his mum (which he puts on loud speaker so everybody can hear it) and they talk about what they're having for tea tonight and whether she's taking the right pills. It's irrelevant to the central story, but adds to Dan's normalness. It's also very funny.

However, the central story strand does get a little too buried in the framing, and every time Gilmartin refers to what you know is the point of being there, you get a bit frustrated when he veers off back to the tedium of his daily life. The piece needs tightening up here and there so that the audience can get a better taste of the jam in the doughnut.

Gilmartin makes for a charming, natural performer. He has an expressive face and an unassuming manner which puts his intimately seated audience at ease. He makes Dan everybody's friend, but cleverly not your best friend - Dan isn't a loner as such, but he is lonely. He feels a little lost, perhaps emotionally vulnerable. A little desperate, even. It's a lovely little performance full of nuance.

First time director Grace Cordell sets up the performance brilliantly by having an airport security guard frisk random audience members as they file in (with permission, of course), as well as politely but sternly bossing people about as to where to sit. It's a clever simulation of what it really feels like to go through security at an airport - you're on your back foot, you feel guilty even when you have nothing to feel guilty about, and you do that perfectly English thing of giving in to authority without even thinking. It's a performance - the guard is an actor - but you still relent, which is exactly what Dan has done by the end of the piece.

Narratively, you know what's coming (as I said, it's not so much a twist as a gradual realisation) and Gilmartin does need to get to the point a little quicker (or at least pack in a bit more material relating to the core plot), but as a debut show (for writer Gilmartin and director Cordell), this is a clever, subtle and professionally staged monologue which asks questions about how radicalisation comes about, how one man's wrong can be another man's right, and how those we least suspect of the darkest crimes can slip under the radar.