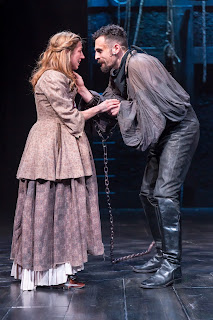 When Chester's Gateway Theatre closed its doors for the very last time ten years ago, there was the expectation that it would be replaced by a performing arts centre called the Northgate Development. However, the Northgate plans were put on hold in 2008, and it wasn't until 2012 that Cheshire West and Chester Council revealed an ambitious vision to transform the city centre's derelict Odeon cinema into a replacement theatre and picture house combined. This vision widened still further the following year with the announcement that the old Odeon building would be renovated and extended to become a cultural arts hub for the entire city.

Last week saw Chester's decade in the cultural wilderness finally come to an end with the grand opening of Storyhouse, a £37 million arts centre which incorporates an 800-seat auditorium, a 100-seat cinema, plus the city library, a community performance and rehearsal space, a restaurant, two bars, and a children's storytelling space. To be blunt, Storyhouse is nothing short of magnificent.

It's also unique in that it's believed to be the only arts centre on the planet which combines a library, a theatre and a cinema under one roof. There are others that come close (the Danes are creating similarly innovative combos in places like Billund and Elsinore), but in this, Chester leads the way. As the venue's Artistic Director Alex Clifton says: "Cheshire is not just bucking a national trend here, it is setting one. Storyhouse is a model for the future of culture that is getting attention around the world."

When you walk around it, the possibilities seem endless. Retaining its Grade II listed art-deco charm and heritage in the original structure, Storyhouse welcomes people through its doors from 8am 'til late. Children have their own library where they have story readings, workshops, fun events and activities; the cinema screen hosts both contemporary blockbusters and beloved classics, as well as arthouse films; the repertory ensemble is the largest in the UK outside of London, and this summer is staging four in-house productions performed both in the Storyhouse auditorium and outside at the city's Grosvenor Park Open Air Theatre; and the restaurant provides Mediterranean food such as flatbreads and kofta to complement two licensed bars.

When I visited Storyhouse on Saturday, its third day since opening, it was buzzing with excitement, and more importantly it was being devoured by hungry, appreciative Cestrians. Ten years is a long time for a city centre to go without a theatre or a cinema, and you could tell from the vibe that Storyhouse has the support of every single person that sets foot in it. Yelping children were reading and drawing in the kids' library (they can even write on the windows in felt tip!), husbands and wives were huddled round open-access PCs researching their family tree, students were gathered in quiet areas doing their homework, and all manner of people were drinking lattes and cappuccinos in the cafe. Storyhouse, after more than two years in the making, was alive and thriving. It was as if it'd always been there. People wasted no time in making it their own.

The floorplan is like a rabbit warren, but getting lost in Storyhouse is part of its charm. You can climb a flight of stairs and turn right and find yourself at the opposite end of a room you thought you'd just walked out of. There are cut-throughs and corners and corridors to other sections and levels, a bright red column of steps accessing the theatre and the Garret bar which overlooks the city, and lining almost every wall around you there are books, books, books. The entire building is the library. It's still divided into sections/ genres, but it's all around you, when you're eating, when you're typing, when you're drinking. It's like walking around inside a giant encyclopedia.

Storyhouse's inaugural season of plays comprises two Shakespeares (the populist A Midsummer Night's Dream and the more heavyweight Julius Caesar), family favourite Alice in Wonderland, and a real wildcard in the form of the 18th century musical The Beggar's Opera. All four will be performed according to a meticulously planned schedule throughout the summer, both indoors and outdoors (except the adults-only The Beggar's Opera). 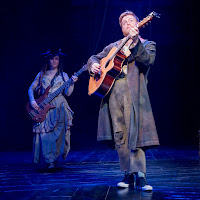 The first to open is The Beggar's Opera (Alice and the Shakespeares open on May 19th and in June respectively), adapted from John Gay's 1728 original by poet, playwright and novelist Glyn Maxwell, who has cleverly woven Chester into the plot by not only having it set in the city, but also giving mention to landmarks such as the Cross, Northgate and Mickle Trafford. This knowing familiarity allows the audience to invest that much more in what might be seen as a brave (if not risky) opening production. It's gloriously immersive in that as well as the finale being decided by the audience (don't worry, it's also reassuringly predetermined!), the performers move into and around the audience, making witty asides and flirting.

The Beggar's Opera as told by Storyhouse is not an opera; it's more of a mixed-media musical, combining folk with rock, balladry with indie. A handful of the songs, overseen by composer Harry Blake, wouldn't be out of place on Blur's Britpop behemoth The Great Escape.

Gay wrote The Beggar's Opera in three Acts, but director Alex Clifton presents it in two (the first running to a lengthy but not arduous 85 minutes). The story is straightforward, of a devilishly handsome highwayman forced to choose between the daughters of two reprehensible crime lords. Alex Mugnaioni is magnificent as Macheath (aka Mack the Knife, although the Brecht/ Weill song rightly does not feature here), strutting around the thrust stage like Adam Ant and Captain Jack Sparrow's love-child, oozing sex appeal and charisma from every pore. He's the sort of character women want to be with and men want to just be, although Macheath's seedier side might make some think twice about that. Make no mistake, Mugnaioni is the star of this show, and every time he's off stage you find yourself waiting for him to come back.

That doesn't mean the rest of the cast aren't just as entrancing. Daniel Goode is the ultimate boo-hiss villain as Peachum, but with a decidedly repugnant edge which strays into the realms of incest and ephebophilia (look it up - actually, best not!). Peachum is not a nice man: he refers to his daughter Polly as a "lump of sensuality", and enjoys a lingering kiss on her lips rather too much. It's one of the reasons The Beggar's Opera is strictly adults-only. Goode gives good bad guy, but he's funny with it - Peachum's sing-off with rival Lockit is a comedy highlight of the show.

Playing young, sweet, naive Polly Peachum is the stunning Charlotte Miranda-Smith, who strikes a beautiful balance between making Polly as thick as two short planks and as endearing as a true innocent. Miranda-Smith delivers some corking gags, such as the scene where she wonders why tumblers are called tumblers, or when Lucy announces that her unborn child is to be called Janey: "Oh Janey, that's lovely! Is that short for Jane?" It brings the house down.

Elsewhere, Charlotte Gorton triples up as Mrs Peachum, Mrs Vixen and Mrs Trapes and is fantastic as each; Baker Mukasa is furtively downtrodden as Filch (despite the character only really being there as a deus ex machina); and Nancy Sullivan is cocky and resilient as Lucy Lockit. There's also solid support from Tom Connor as (among others) molly Suky Tawdry, Jonathan Dryden Taylor as Peachum's arch-enemy Lockit, and Caolan McCarthy as the titular Beggar with a twinkle in his step (he plays a mean piano too).

What all these performers (and those unmentioned) have in common is that they're also fabulous singers, especially Miranda-Smith, whose range and chutzpah adds a Broadway-calibre quality to her numbers. Her voice is astonishing, but then so is everyone's.

The score is rip-roaringly entertaining, played by a live band clearly having plenty of fun, and while Rob Halliday's lighting might sometimes be in the wrong place at the wrong time (then again, maybe that's the actors?), and perhaps a tad too low on occasions, it still feels atmospheric and moody when it needs to be.

The Beggar's Opera is a stunning opening gambit for Storyhouse's inaugural season and shamelessly aims to entertain, titillate and challenge, and that's what quality theatre is all about. This will make you laugh (a lot) and it'll definitely shock you in parts, but not in any bad way. It's theatre that provokes, and if Storyhouse's other three shows can do the same in their own way, there's most definitely a bright future ahead for Chester's internationally unique arts hub, the beating cultural heart of Deva!