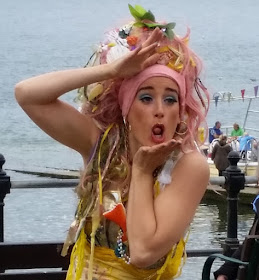 Have you ever wondered what language mermaids speak? No, neither had I, not until I saw Bedraggled on Day 3 of Llawn03 and found out the perfectly obvious truth: they speak flobalob (a bit like the Flowerpot Men!).

Yes, welcome to the crazy, surreal and slightly fractured world of the Kitsch 'n' Sync collective. On Day 2 they flabbergasted us with the sci-fi silliness of Babs and Stella, but Bedraggled was a step beyond. This comic dance theatre performance consisted of three mermaids washed ashore who dance well in unison (despite their flippers) but who lose their tempers easily and even turn an unsuspecting audience member into their marine deity, complete with a plastic octopus on his head.

Trying to fathom a rhyme or reason to the shenanigans of Bedraggled is like trying to pick spinach out of seaweed. There's just no point, it's not meant to be taken seriously. I revelled in the bizarre antics of the mermaids and yet again it was proven to me that this collective is headed for great things. Flobalob!

Elsewhere on the promenade there was Beic, which consisted of an attempt by Gwilym Morus and his team to make music from various parts of a bicycle. It was a slow starter and, to be honest, didn't seem to convince the onlookers at first, but as the "musicians" began recording the sounds of spokes and saddles and filtering them through samplers, then looping them back, the composition began to make more sense. Whether there was any point to making music from bicycles is another question entirely. As Gwilym pointed out himself, there's a reason why people don't make music from bicycles...

Over at the Welsh Baptist Tabernacle on Upper Mostyn Street there was plenty going on. Sadly not represented in the Llawn03 brochure, but certainly worth a look, were two light installations, discreetly hidden away in two dark rooms behind a red curtain to the back of the building. First up was an untitled piece by Angela Davies, a projection of light through a series of lenses to create a pattern on the ceiling which to me represented a cell, to others apparently looked like an embryo or even a moonscape. I asked Angela why the piece was untitled, and her only reason was that she'd finished it just two days earlier, on Friday. I optimistically suggested she might call it Friday. After all, why not?

The second light installation was Transmission Call by Mark Eaglen, a hypnotic 3D hologram bursting out of a 1970s style TV screen. Was the projection a mountain range, or a three-dimensional ECG display? Although Mark had his own personal inspiration when creating the piece (not divulged to others), I saw the remnants of a Star of David, or a hexagram, imprinted into the grassy fields of an alien landscape. There was certainly something sci-fi going on, and the fact you could almost - but not quite - touch it with with your hand made it oddly "anti-interactive"!

In the main Tabernacle chapel was Llawn03 curator Marc Rees's installation Testimony. Within the ecclesiastical surroundings of this 1875 worshipping hall sits a huge neon and fluorescent Perspex cube, segmented like shelving, and sitting within it a handful of old, well-thumbed and much-venerated Holy Bibles. Marc says the installation resonated with the building's poignant political past, while also questioning its future. Being a Non-Conformist chapel, it's obvious what that political background is, and although it is a very well looked after and handsome building, the question over its future is just as clear. To me, the giant green cube represented modernity and progress, technology and non-secularism - and there it was, sitting right at the heart of the chapel, like a futuristic monolith preaching the word of a brand new god. But hidden away, buried in the heart of modernity, the holy word still nestled. Perhaps modernity can never truly eradicate tradition?

Bankers! In the Tabernacle vestry there was what can only be described as a unique performance by choreographer Jonathan Burrows and composer Matteo Fargion entitled Body Not Fit for Purpose. It was a half-hour piece consisting of Burrows performing various hand-based choreographic forms accompanied by Fargion on the mandolin. It's hard to describe, but the closest I can get is like that old 1970s children's series Fingerbobs put to the soundtrack of Gabriel the toad from Bagpuss. That's an obscure description, I know, but then the piece itself defies categorisation.

Bankers! It was overtly political in that it basically represents the futility of trying to use the art of dance to express anything of real concern or weight. Politics is such a dense and complex topic; can it really be represented by choreography? The duo performed various dances, some representing Silvio Berlusconi or Vladimir Putin or George W Bush, others the fear of immigration, or bank bailouts. The ridiculousness of each "dance" proves the point that politics is undefinable through dance, but then the fact choreographers continue to valiantly persevere anyway proves that dance is also magnificently radical and rebellious. Bankers!

A literally breath-taking hike up the Happy Valley to the Elephant Cave on the Great Orme may have been exhausting, but it was worth it to see Guillermo Weickert and Maria Cabeza de Vaca's Cave Memory. Based upon the ancient history of the Great Orme and its prehistoric foundations, it saw Maria dressed in a gold lamé jumpsuit move ethereally around the stunning setting of the cave, while in the lush evergreen background of the forest, a fur-coated Guillermo bobbed in and out of view, edging ever nearer to the golden figure.

It was hard not to see the gold faceless figure as Star Wars' C-3PO, especially when a disco glitterball was introduced and the metaphor automatically turns it into R2-D2! This comparison isn't as crass as you might think, though - the gold figure surely represented modern man and technology, and as the dance progressed, we saw the gold figure envelop the hairy, primitive creature until the two swapped roles. The ancient creature became golden, while the shining future procured the fur coat, a cross-pollination of ancient and modern.

The piece ended with the formerly ancient creature now completely consumed by its golden future, donning the disco glitterball for a head and dancing to Donna Summer's I Feel Love. I don't know if my interpretation stretches that far, but it was bloody good fun to watch, and a marvellous use of an arresting location. One of my favourite performances of the entire weekend, and after that uphill hike, a well-earned one at that!

As with every day of Llawn03, there were many other things going on. There was Nadine Carter-Smith's loud, colourful Pinking Us Together, encouraging passers-by to sit in a deckchair and knit squares to be sewn on to the ever-lengthening giant pink blanket. There was Charles Gershom and Ed Wright's sonic wave laboratory, which attempted to make soundscapes inspired by the wind turbines off the coast of the resort. There was Megan Broadmeadow's Irresoluteoscillating, a sealed bathing hut with peepholes drilled in the side through which you could spy some kind of light projected installation. And there was the simply odd Mr and Mrs Clark's Medicine Show Wagon, like something out of the twisted combined imaginations of Terry Gilliam and Tim Burton involving a rubber horse's head and an attempt to confiscate/ steal the most valuable belongings of the crowd.

Llawn03 was nothing if not diverse. It was also challenging, highly entertaining, and above all, fun. I would say that was the watchword for almost everything on display. You couldn't help but have fun at Llawn03, and hopefully it will just get bigger and better every year as an arts festival. It does for Llandudno what the Fringe does for Edinburgh, albeit on a much smaller scale. At least, for the time being... 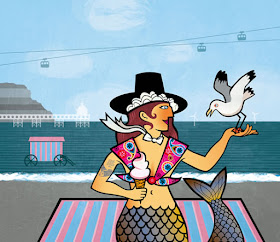